When is it time to consider a denture liner? If your dentures have begun to slip against your gums, leaving them sore and tender, then you definitely have a problem. Sore gums are the major reason that some people give up on wearing their dentures. If you've already tried denture creams and adhesives, or denture cushions but haven't found the relief you seek, then perhaps it's time to ask your denturist for a denture liner.

So, what exactly is a denture liner? A denture liner is made of an elastic material that can act as a cushion or buffer between the denture and gums. The liner keeps the denture from rubbing against the gums because it restores the non-slip fit. This can provide immense relief to the denture wearer who has all but given up hope.

Temporary soft liners are used when the denture wearer's gums are in such bad shape that they have become swollen in the sore areas. A standard relining job would not be possibly at this point because the gums are going to shrink back to their normal shape and size once they have been given the opportunity to heal. Therefore, only a temporary soft reline is appropriate at this time. The soft liner will act as a comfortable cushion for the gums and allow them time to heal. A temporary soft liner is only designed to last a few months before it starts to disintegrate.

A semi-permanent denture liner is only intended for use until your next visit with your denturist, and is slightly harder in texture than a soft temporary liner. Semi-permanent liners are available as an over-the-counter mix. In brief, a powdered base substance is mixed with liquid to form a smooth paste. A layer of the paste is then spread over the entire inner surface of the denture. When the paste has been given a moment to set up to a malleable texture, it's time to set the denture gently into place on the gums. Once inserted, the denture should remain there for five to eight minutes. During this time the denture should be gently chewed and shifted slightly to imitate normal use. This will help spread the liner material into all the crevices and help assure a good fit. Finally, the denture is removed a rinsed an any excess liner along the edges is carefully cut away. Gentle pressure should be used when brushing the liner during cleaning.

Your denture professional should be the judge of which type of soft liner is right for you. 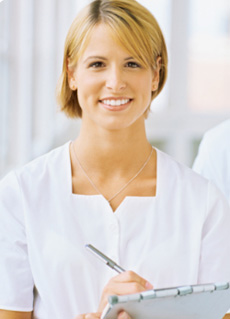 What are dentures? Experiencing some level of denture related pain is not uncommon for denture wearers. There are a number of pains commonly associated...

Sometimes even a great set of dentures can use a little help, and there are a number of supplementary denture products out on the market to fit nearly...